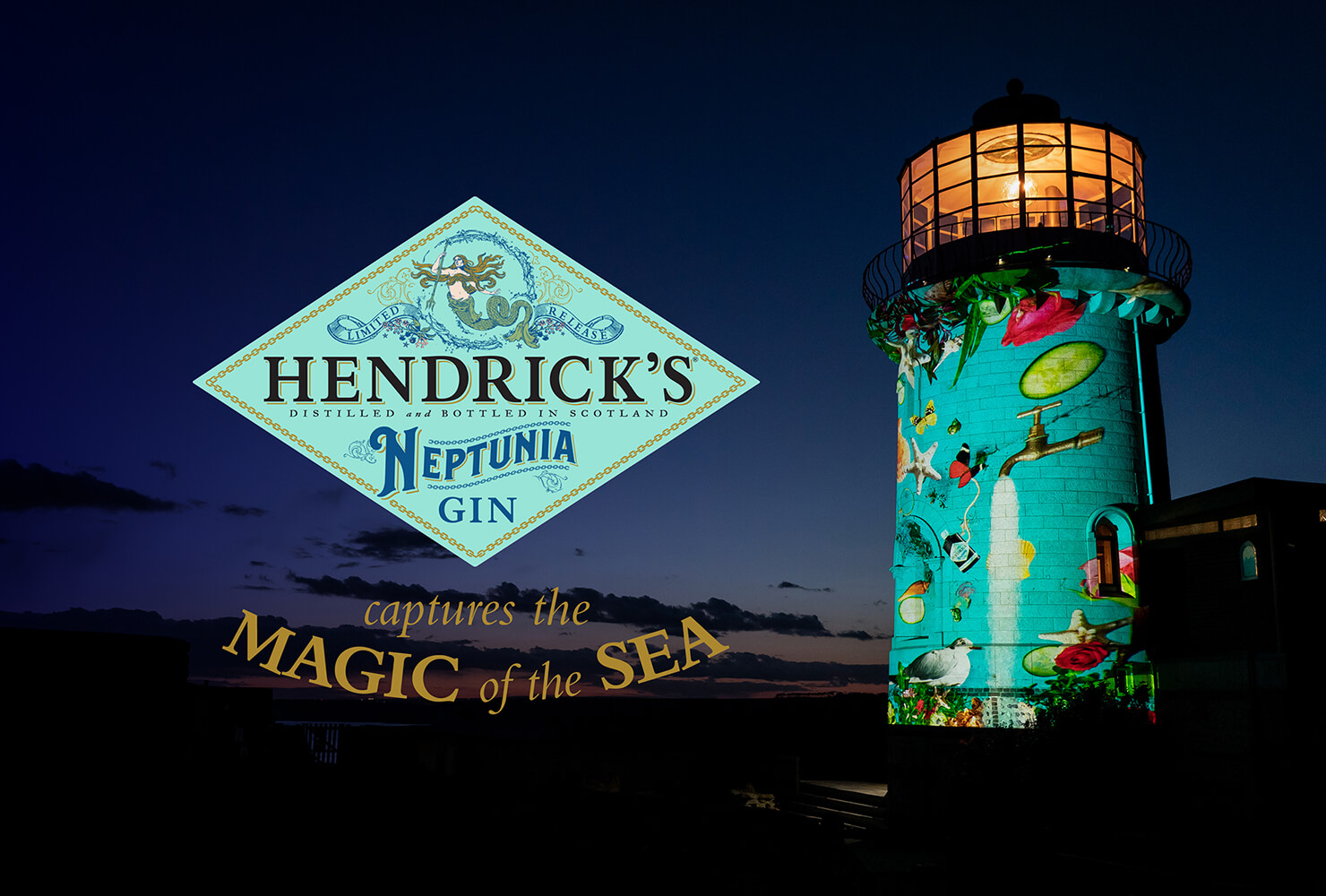 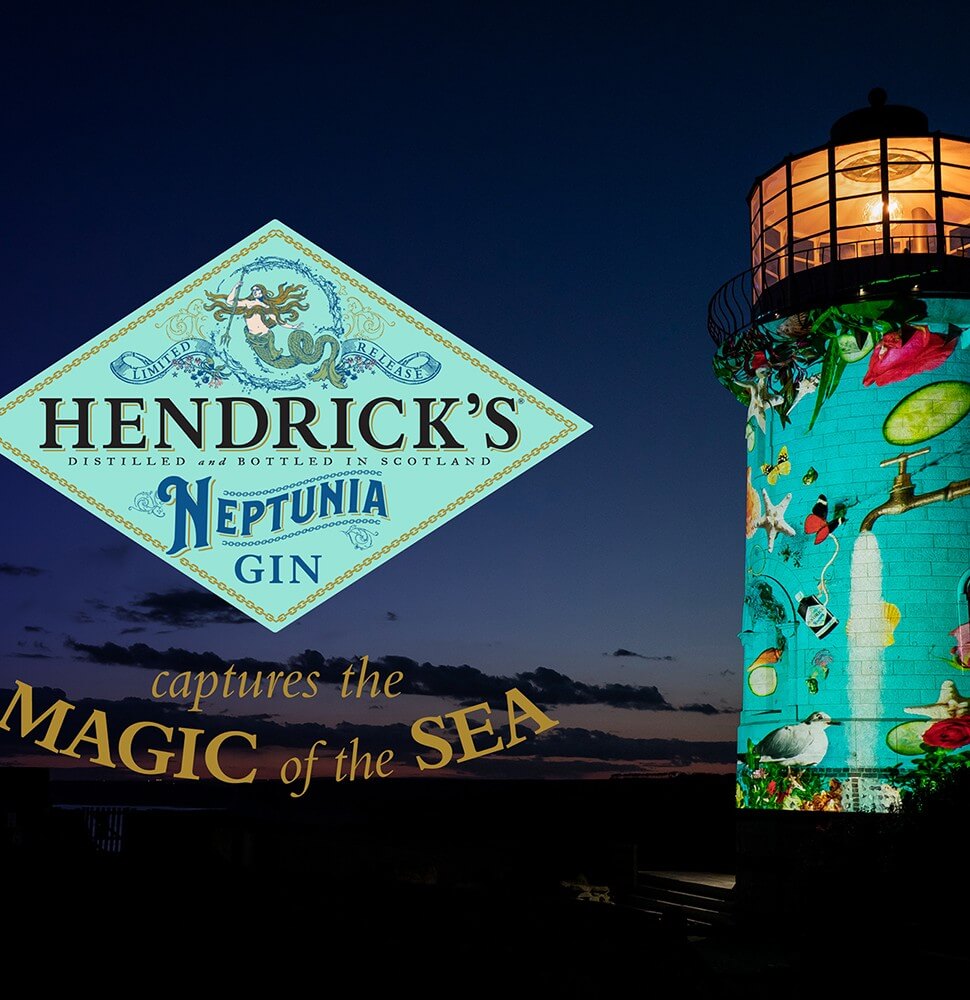 To celebrate the launch of  Hendrick’s Neptunia Gin we have adorned three landmark lighthouses across the UK with stunning, artistic projections.

The breath-taking artworks at Belle Tout in East Sussex, Bidston Lighthouse on The Wirral, and Girvan – home of the majestic Hendrick’s Gin Palace – in Scotland, have been transformed by the wonderfully creative mind of contemporary British artist, Claire Luxton.

Hendrick's captures the magic of the sea 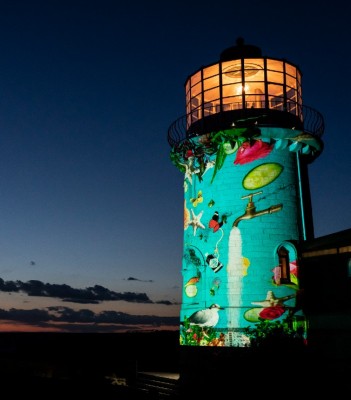 Built in 1832 upon the beautifully rustic ‘Beachy Head’, Belle Tout can be seen for miles out to sea and was a pivotal saviour of seafarers up until the early 1900s. With a rich, Saxon history from shipwrecks to smugglers, the decommissioned lighthouse now sits proud, a common ground for delightful creatures including the ‘The Clouded Yellow’ and ‘Adonis Blue’ butterflies. With its French origins meaning ‘beautiful headland’, Belle Tout has been reimagined as ‘The Siren’.

Bidston Lighthouse on The Wirral, ‘The Shore’: 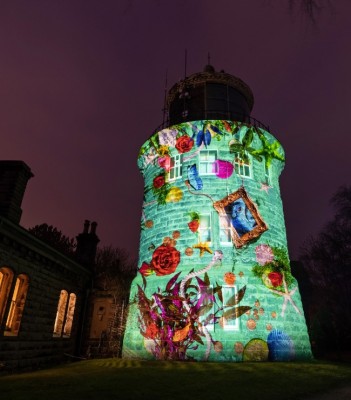 Forever known as the lighthouse built further away from the sea than any other in the world, Bidston Lighthouse is a unique, intriguing beacon that dates back to 1771. From its local heritage, the Wirral has seen inspiring discoveries from shipwrecks to treasure, and Bidston Lighthouse has long stood the test of time as a local saviour, becoming ‘The Shore’.

Girvan Harbour in Scotland, ‘The Haven’: 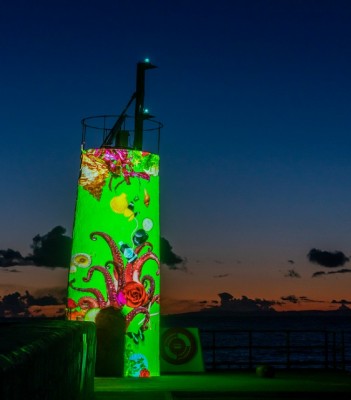 The home of Hendrick’s Gin, Girvan is a quiet but inquisitive town and the home of the cucumber and roses’ favourite. Girvan Harbour Lighthouse was commissioned in 1890 as a safe anchorage for the mesmerising South Ayrshire coast. Featuring two distinctively emerald lights – the lights called out upon the crashing waves to safely bring home the fisherman that frequented the town - Girvan Harbour now embraces the depiction of ‘The Haven’.

Claire Luxton is a British contemporary multidisciplinary artist working with photography, installation, poetry, and painting. After receiving a BFA from Goldsmiths University of London, Luxton’s work draws on both the modern anxiety of society and the environment, with each portrait, painting and accompanying poetry, becoming and exploration of isolation, desire and uncertainty. To see more of her work see here.